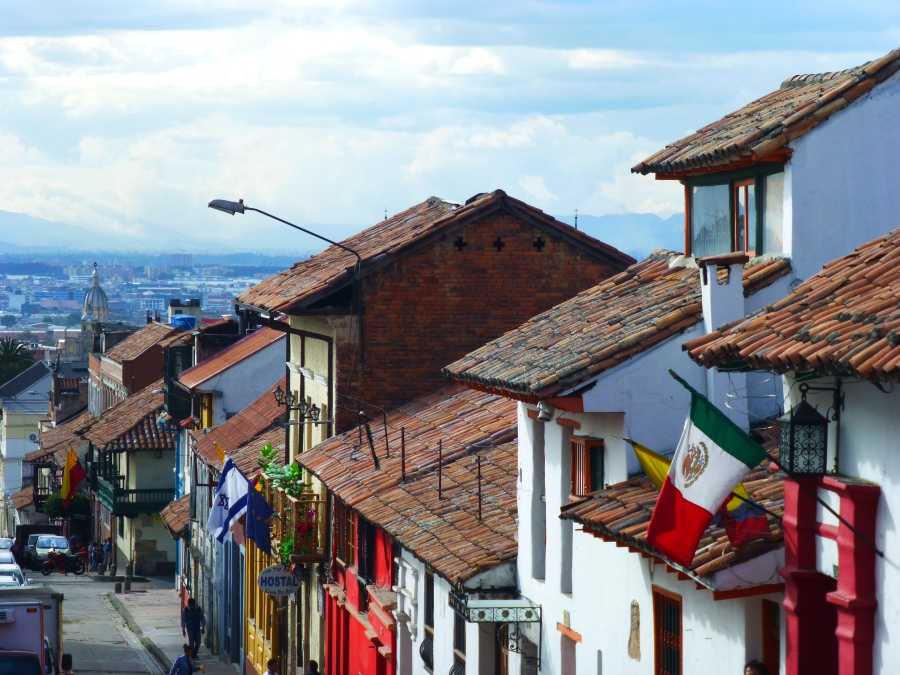 I admit that when I woke up yesterday morning, I was feeling as beige as the endless procession of food I’d consumed since leaving London. Whether it was a combination of the altitude, jetlag or the surprisingly cold weather, I wasn’t as excited as I usually am to be in a new city. However, now coming up on my fourth and final day in Colombia’s capital, I feel slightly more at ease.

My first day started very early. After a sleepless flight on Wednesday afternoon, I practically crawled my way to the hostel and into bed for a brief snooze. This unwittingly became a deep sleep and I awoke many hours later, revived but ravenous. All I could think about was eggs. It was still dark  but I could hear people milling about and talking outside. Down the hallway, I could hear the shower going. I lowered myself down from my bunk a bit too quickly, establishing a deep purple bruise on my hip in the process. Stretching, having a sip of water, still thinking about eggs, I checked the time on my phone and my heart sank. 23:52. It wasn’t even Thursday yet. In my panic, I admit to spending quite some time googling increasingly complex variations of: “Is there a 24-hour McDonalds in Bogota. Do they serve Egg McMuffins?”. No.

La Puerta Falsa, Bogotá’s oldest cafe, opened at 7am and I was standing outside, consumed with my desire for eggs. I’d read about their huevos pericos (eggs scrambled with tomato and onion) in the long hours that morning. Inside, it is bustling, cozy and warm, with small wooden chairs and tables filling the two floors. I couldn’t see a menu anywhere but my eyes were drawn to rows and rows of steaming tamales stacked behind the glass counter. I opened my mouth to order eggs, but in a flicker of doubt about the word for eggs being the same as the word for testicles, I immediately changed my order:  “Un tamal, por favor.

The tamal itself was a adequate substitute for the huevos. Upon pulling apart the banana leaf parcel, I found a deliciously tender piece of of chicken that fell off the bone, surrounding by a starchy mush (it was better than it sounds) of rice and maize. People say that Colombian food isn’t particularly spectacular, but that it’s always comforting. I certainly felt very comforted sitting there on a Thursday morning, tucking into my long awaited breakfast.

After eating, I went to the Museu del Oro – Bogotá’s gold museum. I spent an hour or so wandering around the three floors learning about the indigenous populations of South America and the role of gold in their societies. In contrast to the Parque Santander outside, the museum was still and calm with a mystical air about it. Ceremonial masks lined the display cabinets alongside figures of jaguars and birds, jewellery and shamanic tools and paraphernalia.The sheer amount of gold on display and the intricacy of the pieces was incredible.

Lunch was a typical Colombian dish of Ajiaco – a potato soup with a corn on the cob dunked in the middle and shredded chicken on top. There was a mound of rice on the side with small pots of cream and capers and a slice of avocado. I have later learnt the typical Colombian way is to stir it all in together, but I proceeded to eat it piece by piece, keeping everything separate, which was still equally satisfying.

In the afternoon, I joined some other people in my hostel on a walking tour of Bogotá’s street art. Graffiti is prohibited in Colombia but not illegal. In the last 10-15 years, it has become a big part of the identity of the city. Some artists paint to make a political statement, others just to spread colour. The artists all have their own unique styles and messages that they convey. Graffiti is the art of the people, no better represented than by a mural by Toximanico in downtown Bogota featuring a local street vendor, Carlos. Here he is standing next to his graffiti-self. 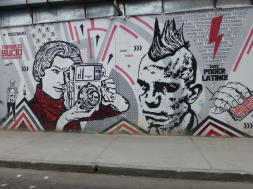 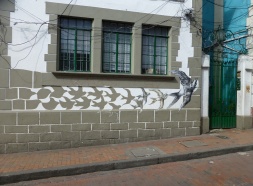 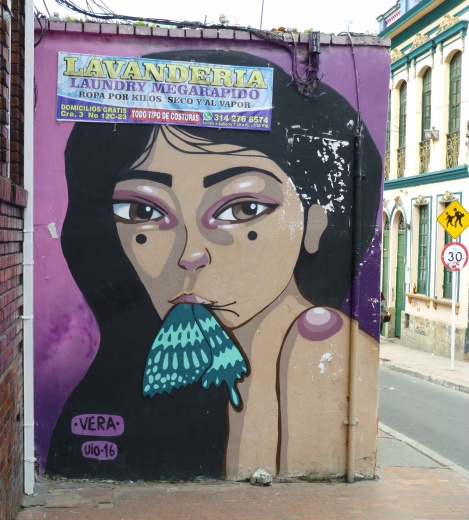 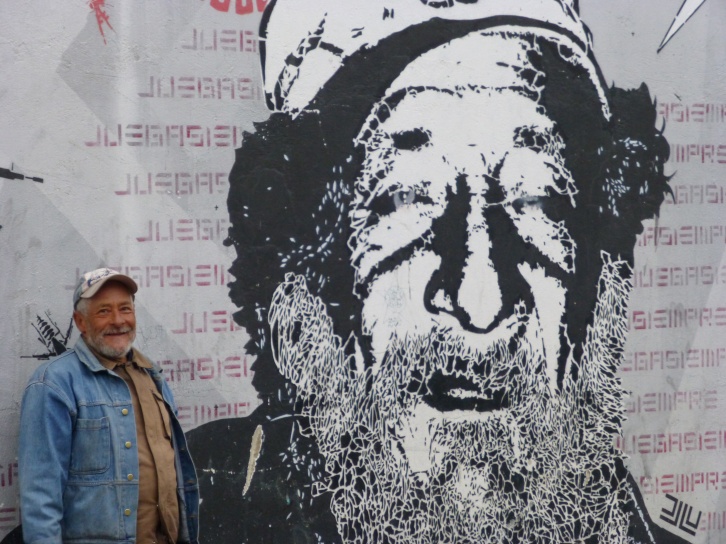 Yesterday, still feeling a bit confused by the city, I went on a walking tour. The tour wound through the historic district of La Candelaria, out past the Presidential Palace and the political institutions, and finally ended up with a game of Tejo, Colombia’s national sport. The aim is to throw a heavy metal disk at a target loaded with gunpowder and celebrate when the sparks fly, the smoke hisses and the smell of party poppers and fireworks hits your nostrils.

The history of Colombia is rich, turbulent and recent. I won’t begin to go into it here, but hopefully over the course of the coming weeks, I will find out more and come to understand it from the different perspectives of the cities I visit and the people I hear from.

I struggled with Bogotá at first, and if I’m totally honest, I am excited to head on to Medellín tomorrow. Bogotá is perched on a plateau high up in the Andes, ringed by mountains, which gives it quite a claustrophobic and isolated feel. Where I’m staying – La Candelaria – is filled with grids of narrow calles and carreras and low Colonial buildings. In parts, it has an almost souk-like feel and is easy to get lost in. Roadworks riddle the streets and, despite bursts of brilliant sunshine, it can be cloudy and grey and constantly threatening to rain. I know that the further north you go, the higher and sleeker the buildings get and the more modern and sterile the city becomes. I’d be interested to see that part of it too, but for today, I’m thinking of rounding up my few days with a trip up Monserrate, the mountain that towers over the east of the city.  It’s a short funicular ride or dicey 90 minute walk to the top, from which I’ll be able to see out across the city and say goodbye before I head onto Medellín.

Travelling and writing about it View all posts by Rachel

One thought on “First Impressions of Bogotá”